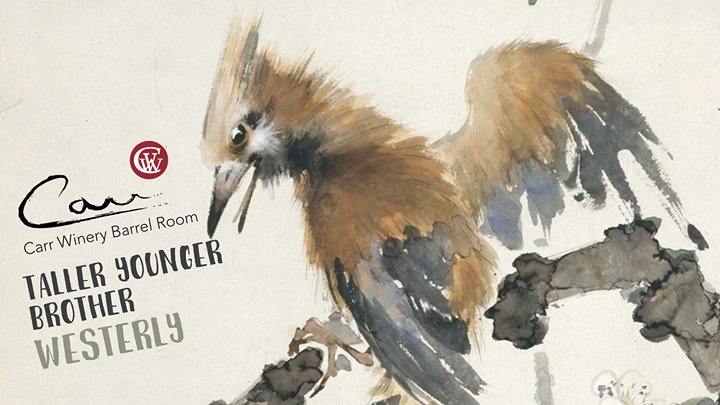 Taller Younger Brother (Oakland, CA):
Taller Younger Brother is a four piece post-americana band playing story-driven rock n’ roll. They have been likened to Delta Spirit, Built to Spill, and The Mountain Goats. TYB began as the singer-songwriter project of Kyle Glenn, but has evolved into a full fledged collaboration with Steve Sarmiento (lead guitar), Riki Newton (drums), and Connor Bennette (bass). Their varied geographic origins and musical backgrounds create an original sound all their own. TYB is celebrating the release of their second EP on this tour.

Westerly (Berkeley, CA):
Westerly has been playing in the Bay Area for two years and has headlined the Amnesia in San Francisco, Armando’s in Martinez, and been played on KPFA’s “The Hear and Now” and KALX’s “The Next Big Thing.” Their last album “Fire in the Evergreens” was reviewed by Divide and Conquer who said, “[Westerly’s] sound has a very modern relevant feel to it that takes the best parts of folk and mixes it with the spirit of genres like rock and punk that ultimately make it a rare but needed perspective in the music scene.” Reminiscent of the hard luck storytelling of Tom Waits and Leonard Cohen’s tarnished spiritual imagery, Westerly writes American folk rock for the new era.